Tulare Astronomical Association
Celebrating 50 Years of
Sharing the Universe With Tulare County Since 1967.

The Tulare Astronomical Association owns it’s own observatory. The observatory was built in 1967 on donated property. It is located 7 miles southwest of the city of Tulare at 9242 Avenue 184 Tulare, CA 93274. All materials and labor were also donated by members of the community. The observatory has a 12′ 6″ motorized Ash Dome. The dome was donated by the Tulare Lions Club.

The Astro Physics Center is our meeting room located next to the telescope dome. The building is 15′ X 32′. It was built at the same time as the dome and all materials and labor were donated by members of the community.The facility provides a meeting place for the TAA, outreach and educational programs for the public.

he 12-inch  Cave Astrola is the TAA’s main club telescope, and is mounted inside of the observatory structure adjacent to the Stan Manro Astrophysics Center.  The Astrola is a Newtonian reflector-type scope which features an f/6, 12.5-inch diameter primary mirror with a focal length of 74.5 inches (1892 millimeters).  The primary and secondary mirrors are housed within a 14-inch diameter fiberglass tube which is attached to a massive German Equatorial (GEM) mount. Both the polar and declination shafts of the GEM are motor driven to allow accurate tracking of celestial objects.  A slow motion control on the declination shaft allows for periodic correction of field drift during tracking operations. The main telescope tube can be rotated so that the eyepiece is always in a comfortable position for viewing the night sky. Digital setting circles (DSC) attached to the scope axes’ make locating celestial objects easy. 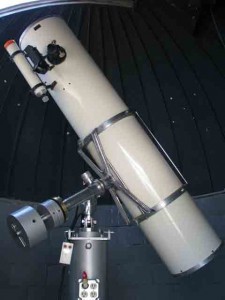 This telescope was originally built in 1964 by Cave Optical in Long Beach Ca. The scope and mount have undergone significant repair and upgrades to improve performance and appearance.  All of this work was performed by Greg Eckes.  The work includes the following:

DON’T MISS OUT!
Subscribe to the TAA Newsletter
Clear Skies!
You can unsubscribe anytime.