The information presented here was gleaned from the writings of Stan Manro and various newspaper articles that he had saved over the years. Stan was president of the TAA from 1978-1993

Arthur Pursell and six friends formed the Tulare Astronomical Club in 1933.  They combined their money and purchased a 4-inch refracting telescope, from a Boston firm, for $100.00.  After a short time, member interest in astronomy began to wane and the club was dissolved. Pursell paid back each of his friends the money that they had invested in the telescope. The telescope was now his. Pursell talked his brother-in-law, Carl Petrerson a farmer, into donating an acre of land for his an observatory. It was located three miles east of Tulare. The first observatory was constructed out of a circular building made out of old railroad ties and built by Carl Peterson. A piece of track was used for the roof to ride when it was rolled back for observing. This was the first observatory in Tulare. In 1936 Pursell made a 10-inch Newtonian telescope to replaced his 4-inch refractor in his observatory. The mount was an equatorial design. It used a model T Ford rear axel and differential for the polar axis. This building was used until 1953 when the the roof became inoperable due to deterioration of the wood. Purcell made a new building out of aluminum and this time it had a revolving dome. Pursell used this observatory until 1969 when it and the telescope were donated to Scicon. Scicon is the Tulare County Schools, science and conservation, camp for 6th graders, located in the foothills of Springville.
In 1957 Sputnik launched an American race to space and the moon. There was a lot of interest in space and astronomy promoted by the Federal Government and the establishment of NASA. Around this time Arthur sought out Stan Manro, a high school science teacher & Boy Scout leader, to help him promote public interest in astronomy.  In the spring, summer and fall, Pursell and Manro would ask people they knew that owned a telescope, to bring them out to a dark location in town. They would invite the public to come and look at the stars through these telescopes. In the winter months, they would hold astronomy meetings in the Tulare Union High School science classrooms. They would view films from NASA and discuss various topics related to space and astronomy. A small astronomy association began to form. One member of the group, Roy Koeppe, became interested in building his own observatory. His wife Sharalyn became the treasure for the group. Another member, Howard Baker, was a machinist. He brought the telescope he made to a meeting and discussed the steps he went through to make it. This was the rebirth of the Tulare Astronomical Club.

The Telescope That Needed an Observatory 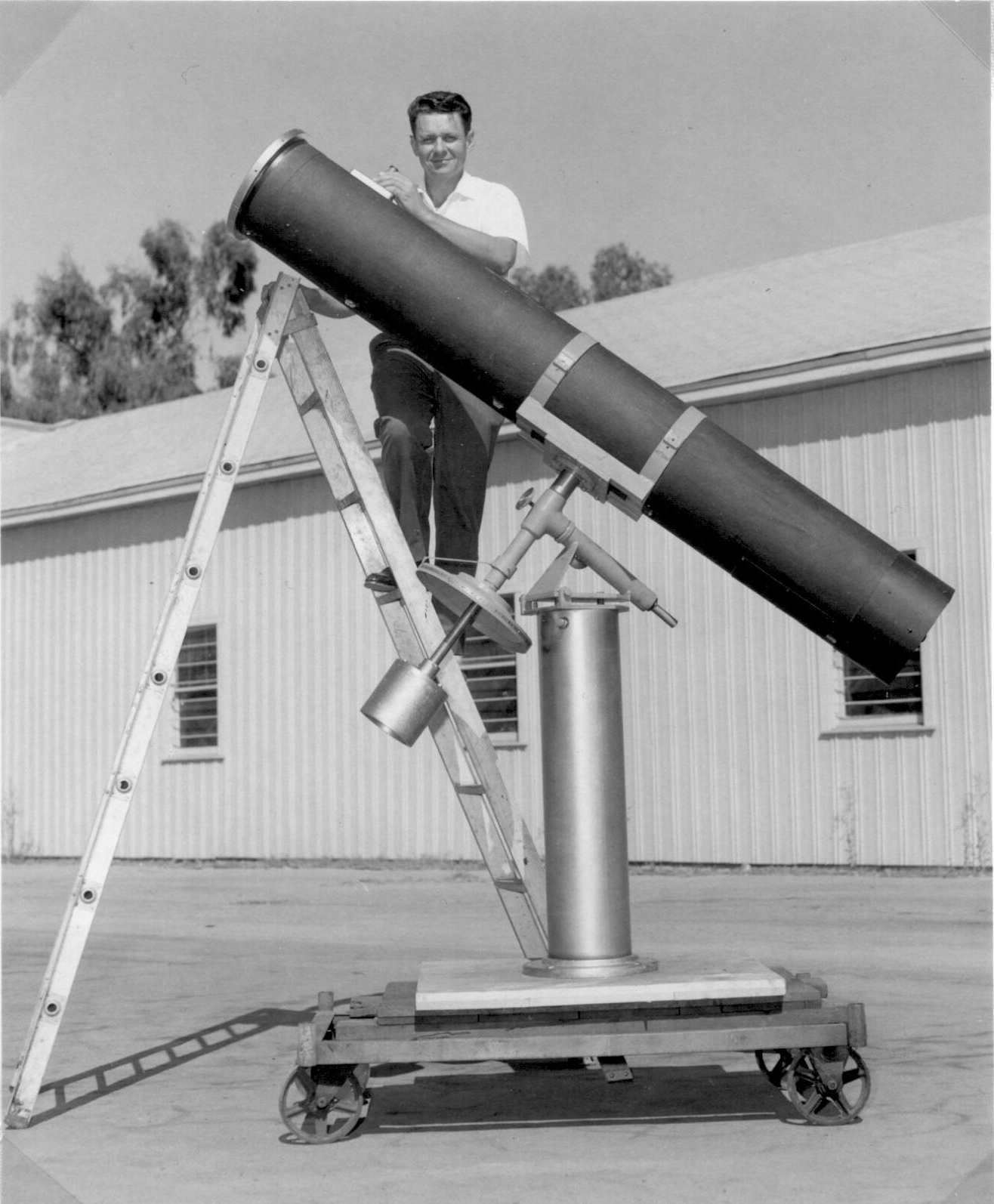 Mervin Fulton, poses outside of his shop, with the completed mounting for the Harry Brewster Brown Telescope. 1966

The Tulare Astronomical Club was growing and needed its own large telescope. In 1966, an astronomy enthusiast in Tulare, Harry Brewster Brown, died before he completed his homemade telescope. His daughters contacted Stan Manro and asked him if the Tulare Union High School would be interested in a partially completed 10-inch telescope. Manro said that the school had no place for it but he was interested and knew someone that could finish the scope for their father. Manro contacted Pursell who was more than happy to finish it. The 10-inch mirror, secondary holder (spider) and focuser, needed to be mounted in the tube. During the moving process the 10-mirror, that Mr. Brown had made, fell out of the tube when the movers picked it up and was broken. Manro and Pursell asked the daughters if they would be interested in purchasing a new mirror so that the telescope could be finished. They agreed and Pursell completed the work on the scope.

The acquisition of the 10-inch telescope created new challenges for the club. First, the telescope needed to be mounted. The machinists, at the Merv Fulton Pumps Shop, built the equatorial mount and polar axis with a sidereal drive and declination scale. Second, a 10-inch equatorially mounted telescope needs to be permanently mounted in an observatory. To build an observatory, the club needed to raise money for its construction. Third, the observatory needed land away from city lights. Harry Brown’s Daughters offered to donate land, on their ranch, for an observatory. Pursell thought the land was too close to the city lights so he declined the offer. Purcell asked Bob Heitzeg, a childhood friend and farmer, to donate an acre of land for the observatory. The land was located about six miles south and west of Tulare. Heitzeg agreed to donate the land as long as it was used for astronomical purposes and a Deed was drawn up. 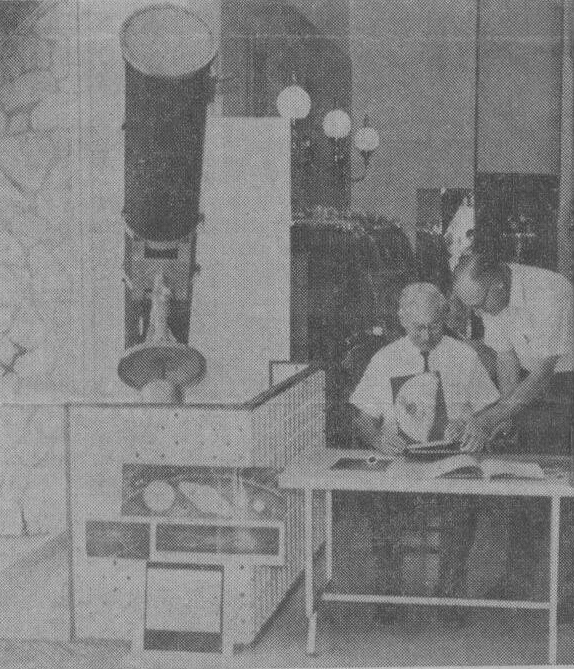 1966 newspaper photo, from the Advance-Register

This 1966 newspaper photo, from the Advance-Register, reads

“Tulare’s eyes in the sky” went on display today at Leggetts Department Store. A group of Tulareans interested in astronomy are attempting to raise funds for an observatory that will house the telescope and mounting. Shown here with a photograph of the moon taken with the camera is Arthur Pursell, seated, and Stanley Manro. 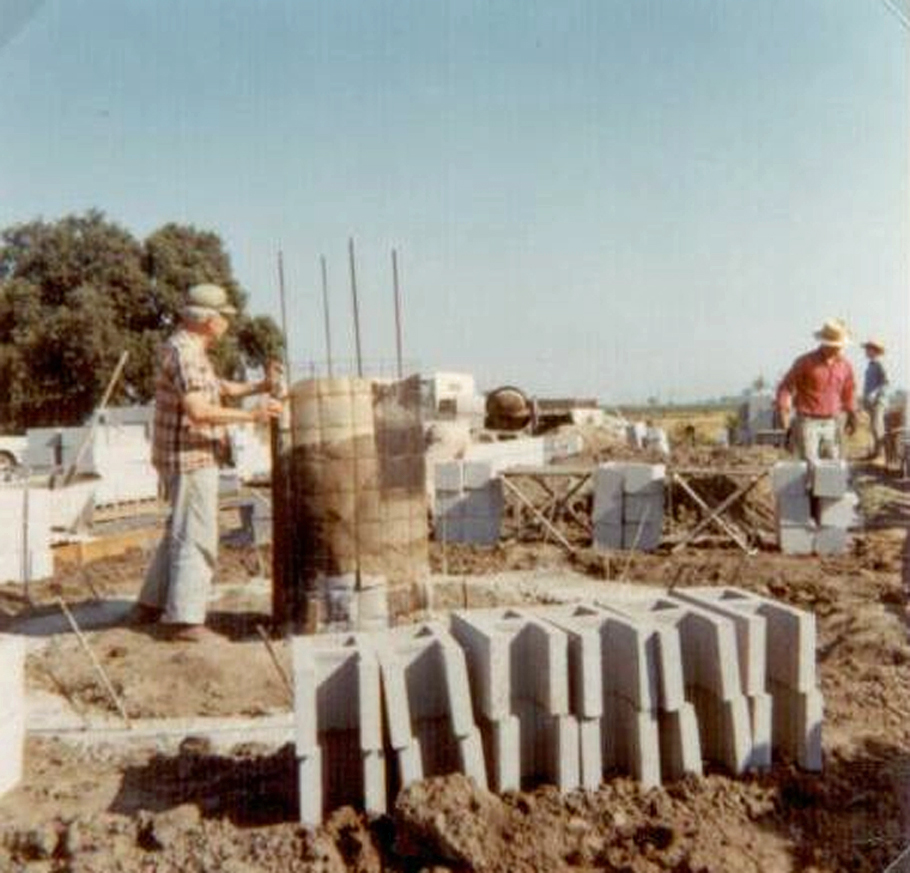 1967 Photo of Arthur Pursell working on the telescope pier. Visible is the circular footing for the cement block base.

The original plan for the observatory was for a flat roll-off roof. It is much cheaper to construct. The Tulare Lions Club would have none of that. They wanted the observatory to look like an observatory. They said the observatory should have the real thing, a dome. They ordered it from the east and had it shipped, assembled and mounted on a circular structure of cement blocks. It functions just like the professional domes do. By the fall of 1967, a 16’ X 32’ lecture room and restrooms were completed. All labor and materials were donated.

These people helped make the dream of an observatory a reality! 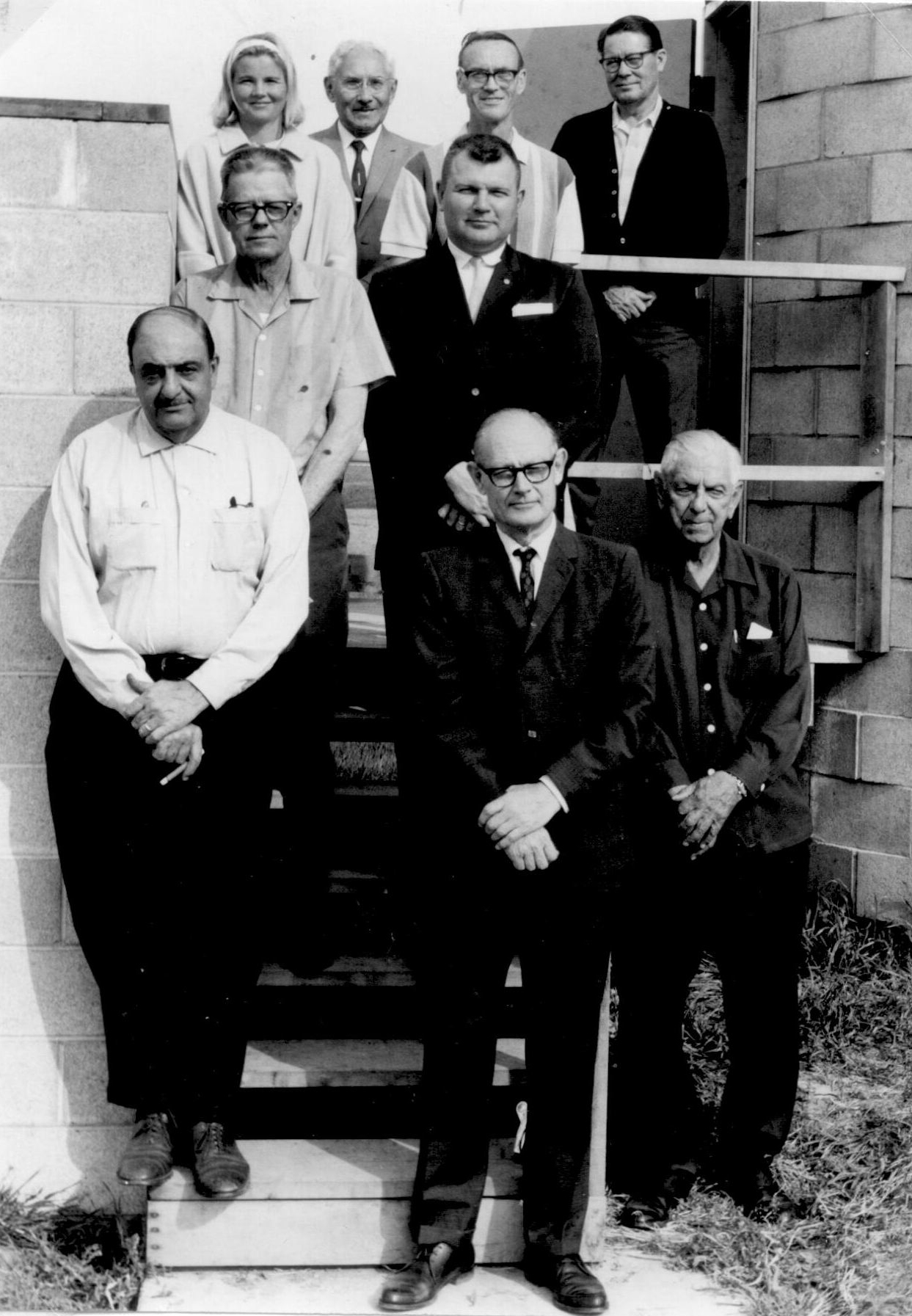 1978 photo of Stan Manro, past TAA President and Bill Thompson, past President of the Tulare Lions Club stand outside of the observatory that they helped build. 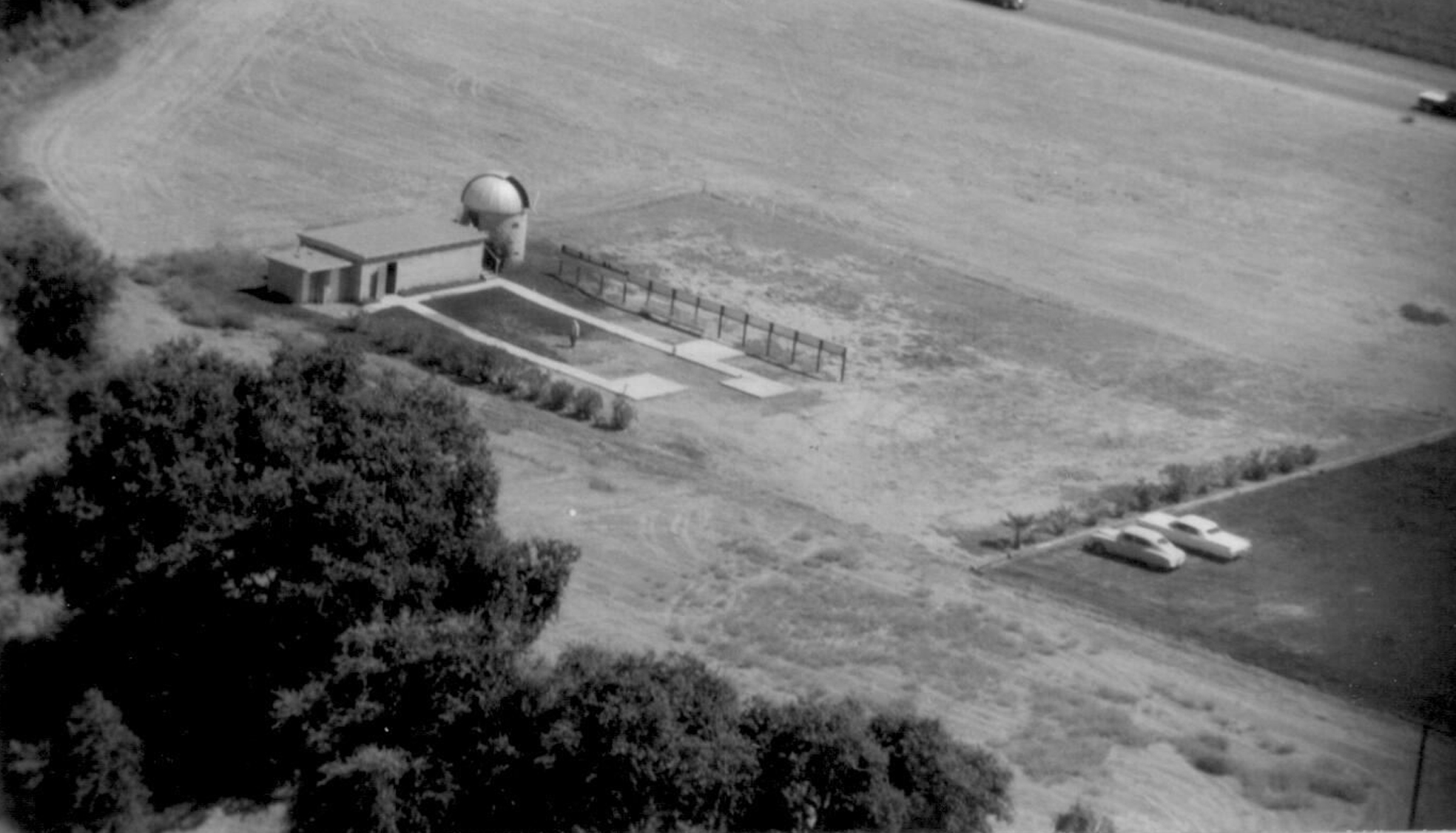 Arial photo of the TAA observatory 1972 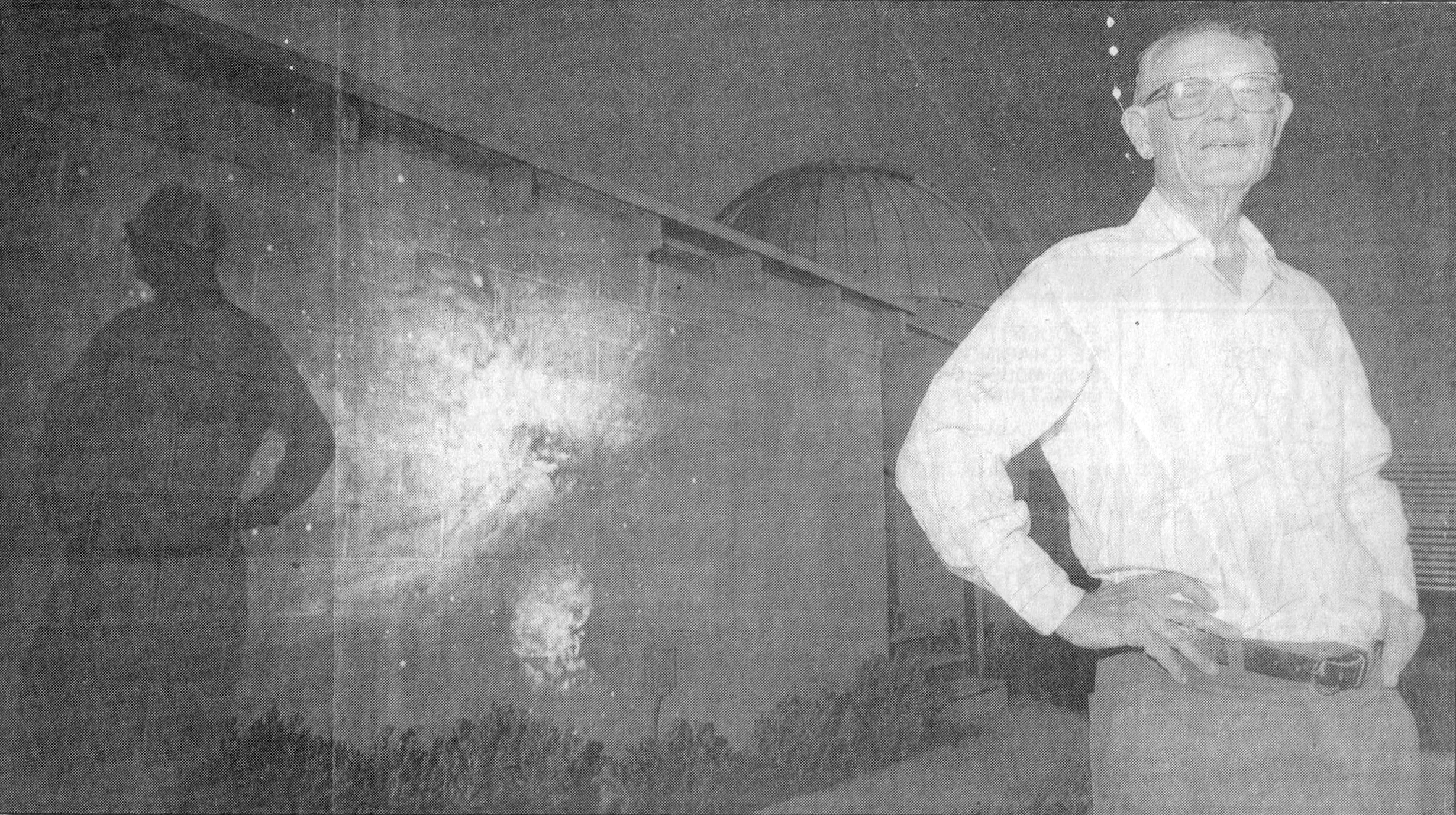 August 1993 photo of Stan standing in front of the Astro-Physics Center with the Orion Nebula projected on the wall behind him.

This 1982 newspaper photo of Two of the TAA founders Stan Manro, Left & Arthur Pursell, Right, inspecting a refracting telescope.
1982. Arthur passed away in March 1986 age the age of 95 and Stan in September 1996 at the age of 85

The observatory is named after Arthur Pursell. The meeting room is dedicated to Stan Manro. It was named the Stanley H. Manro Astro-Physics Center in November 1997.
DON’T MISS OUT!
Subscribe to the TAA Newsletter
Clear Skies!
You can unsubscribe anytime.